The islands of São Tomé and Príncipe are situated in the Atlantic Ocean about 300 and 250 kilometers (200 and 150 miles), respectively, off the northwest coast of Gabon. Both islands, also known as Guinea Islands, lie on an alignment of once-active volcanoes. The equator lies immediately south of São Tomé.

The geographic isolation from Africa has resulted in high levels of endemism, notably among plants (130 species) and birds (28 species). Overall, Sao Tome and Principe has 895 species of plants, 143 birds, 15 mammals, 14 reptiles, and 9 amphibians.

About 28 percent of the country is forested, of which 44 percent is classified as primary forest. Most of this remaining forest is found in the most inaccessible parts of the country. There are over 150 type of tree ferns on the islands, more than anywhere else in Africa. Also, coconut palms reach down to the fringes of the beaches, almond trees and bread fruit trees line the town streets, and banana, cocoa and sugar cane plantations are plentiful.

Orchids are the most important among the spontaneous plants on the islands. Up to now, 129 orchid species have been identified: 101 on Sao Tome, and 64 on Principe. The rainy season is the best time for orchid spotting, but species above 800m are still in flower in January. 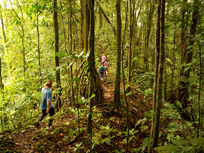 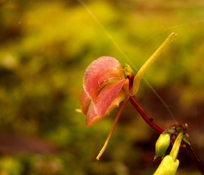 Want to explore the island? There are many possibilities: marine excursions like snorkelling, kayaking, scuba diving, whale watching and terrestrial excursions like hiking and biking. Read more

Forever Príncipe conservation alliance is part of the Conservation Tourism Programme on the island of Príncipe in the Gulf of Guinea developed by Africa’s Eden. Read more