African children on ‘gorilla warfare’ mission in run-up to COP15 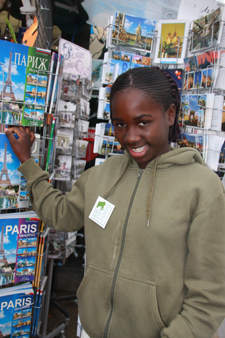 African children on ‘gorilla warfare’ mission in run-up to COP15

“It’s the gorillas I’ve got to thank for bringing me here.” said Sephora Binet-Mboti, (13), as she gazed up, wide-eyed, at the Eiffel Tower in Paris.

She was a long way from her in home in Central Africa where she lives in Gabon at subsistence level in a clapboard house with her parents and nine brothers and sisters.

Sephora had never travelled as far as the capital of Gabon, let alone to the developed world, but on Thursday (3rd December) she boarded a plane for an all-expenses-paid dream week in Paris, the city of lights.

She was one of two children from Gabon and five from Uganda who were jetted to France by UNESCO and the French Environment Ministry (MEEDDM) to be crowned ‘Young Ambassadors of the Great Apes’ as a culminating event for the UN Year of the Gorilla (YoG).

The event (5th December) was timed to coincide with the run-up to COP15, the United Nations’ climate change conference in Copenhagen.

UN YoG Ambassador Ian Redmond, the British conservationist and colleague of the late Dian Fossey, was at the Muséum National d’Histoire Naturelle in Paris for the inauguration ceremony of the children who will return to their countries in their ambassadorial roles to spread the conservation message.

The were selected from more than 100 schools in Gabon and Uganda that since 2008 have been taking part in a nationwide educational awareness project called Great Apes and their Habitat to teach them about the importance of protecting great apes from extinction and preventing deforestation and climate change.

“Getting children involved is the key to the future”, said Ian Redmond.

“Children will be either the conservationists or the bush meat customers of the future. If we can convince them to help protect the great apes, they will educate their parents and their peers.”

Like the Slumdog Millionaire cast children who were whisked to London for all the glamour of the Oscars, the seven children came from poor families who survive mainly by subsistence farming. They all live in close proximity to wild gorillas.

The project is supported by numerous conservation organisations including the Jane Goodall Institute, UNESCO, the Convention on Migratory Species, the Uganda Wildlife Authority and the Wildlife Conservation Society.

In 2010, it will be rolled out in Congo, the Democratic Republic of Congo and Cameroon.

Great apes in the garden

The two young ambassadors from Gabon are from forested areas near Loango National Park which is inhabited by western lowland gorillas.

The five from Uganda are from near Mgahinga and Bwindi national parks, the only region in the world where tourists can see some of the world’s remaining estimated population of 750 wild mountain gorillas.

Both species are considered ‘critically endangered’ by the IUCN and face extinction. The main threats include logging and loss of habitat, bush meat hunting, disease and the impact of war and political unrest.

Immaculate Nyiransenga (17), one of the Ugandan young ambassadors to travel to Paris, said that people’s attitudes to gorillas in Mgahinga could be negative despite the income gorilla tourism brings in.

“We live on the edge of the park so sometimes the gorillas come into the gardens and raid our banana crops”, she said.

“But now I consider gorillas like my brothers – we have to be tolerant and live together.”

Gorillas on the menu

In Gabon a survey of the 4,600 children who took part in the Great Apes and their Habitat educational awareness project revealed that up to 70% from the Loango area had eaten gorilla and up to 90% had eaten chimpanzee.

In Asséwé, the small village where Sephora lives, most people get by growing manioc, sweet potato and bananas and small-scale fishing. Over half of the children surveyed here said their fathers regularly went bush meat hunting, “In my village, people love to eat gorilla and chimpanzee meat,” said Sephora. “They will put a bullet in a gorilla as soon as they see one in a tree.”

But the awareness project, she said, had changed her mind. “I wouldn’t eat gorilla meat now – I couldn’t – the education project has given me a different idea of gorillas. We have to protect them, not eat them,” she said.

She was accompanied to Paris by Herman Loudou, the Gabonese team leader at the Fernan-Vaz Gorilla Project at Loango National Park (http://gorillasgabon.scd-conservation.com/).

The park has a ‘tourism pays for conservation’ ethos and its operator Africa’s Eden (demo.africas-eden.com) supports a pioneering gorilla reintroduction programme that successfully transferred six bush meat gorilla orphans into the wild in July.

Herman was part of the team of conservationists who over the last 18 months have visited 66 schools in Gabon with the Great Apes and their Habitat educational awareness project.

“When we started talking of gorillas in terms of their being vulnerable and sensitive creatures, the children looked shocked,” he said. “They considered them aggressive and frightening and had no idea of the importance of their role in seed dispersal and the forest life cycle.”

Changing cultural attitudes is a major challenge to overcome in protecting the dwindling populations of gorillas and chimpanzees in Africa. “I used to hunt monkeys and sell them for money to buy things I needed like exercise books for school when I was a kid,” said Herman. Gorillas are also believed to confer strength. “Gorilla is a meat that the village chiefs want to eat because it is a big strong animal and they believe that in eating it, they will become powerful,” said Ian Redmond.

“It’s an engrained cultural attitude we have to try to change. If I’d grown up in a village like that I’d probably think the same thing.”

As part of the Great Apes and their Habitat educational awareness project, the children were shown models of gorilla skulls, hands and feet.

“They were so like humans’!” said Guinola Guigambou (12) who is from Omboué in Gabon and the other Gabonese young ambassador of the great apes to be taken to Paris. “It made me realise how closely we’re related.”

Sabrina Krief, primatologist at the Muséum National d’Histoire Naturelle in Paris and founder of the Projet pour la Conservation des Grands Singes, devised the Great Apes and their Habitat educational awareness project which through games and models teaches children the importance of preserving the biodiversity in the world’s remaining tropical forests.

The Great Apes and their Habitat educational awareness project was devised by primatologist Sabrina Krief at the French Natural History Museum (Projet pour la Conservation des Grands Singes (http://sabrina-jm-krief.com/education%20environnement.html)) with the help of local conservation NGOs and the environment ministries in Uganda and Gabon.

Since 2008, more than 15,000 school children in 52 schools in Uganda have learned about the critically endangered mountain gorilla and 4,600 children in 66 schools in Gabon (many of them live in forestry concessions as Gabon is 85% forested).